December 21st will be a busy night for sky viewing. This date is when the winter solstice occurs in 2010. It also happens to be the date of a full moon. The December full moon is often called the Cold Moon or Long Night’s Moon, both are appropriate names for those of us in the northern hemisphere. The name of Long Night’s Moon is especially true this year because the full moon will occur on the longest night of the year. In North Carolina, the moon will be rising around sunset on the 21st.

December 21st is just one day before the Ursid meteor shower reaches it’s peak intensity. They begin increasing in intensity around the 17th. The Ursids will appear to be radiating from a spot in the sky near the cup of the Little Dipper (Ursa Minor) constellation. The Ursids aren’t a big shower – they may only produce 5-10 meteors an hour, but you might get lucky and spot a few of them if you’re out looking after midnight. Unfortunately, the light from the Long Night’s Moon may conceal these traditionally faint meteors.

While you’re out checking out all this night sky activity, you can also take a moment to observe Revolving Female and Dilyehe, two of the Navajo star figures described in my book Star Trails – Navajo.

Revolving Female, or Nahookos Ba’aaddii, will be visible high in the northern sky over North Fire (the North Star). She will be on her side, with her head to the east and her feet to the west. Many may recognize her main stars as the “squashed M” of the Greek constellation Cassiopeia. View a free PDF file of the Revolving Female pages from Star Trails – Navajo. Revolving Female is complemented by Revolving Male, who may be seen low on the northern horizon below North Fire. 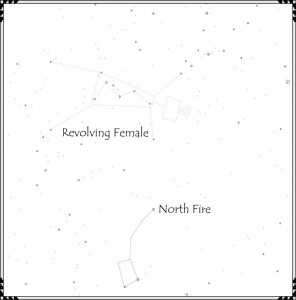 Dilyehe is a cluster of 7 or so relatively bright stars that will be seen high in the eastern sky after sunset on December 21st. According to the Navajo star stories, these were the first stars that Black God placed in the night sky. They are also commonly known as the Pleiades star cluster.