On November 12, 2011, the Tarheel Trailblazers hosted a ribbon-cutting for the trail work being done under the recent Recreational Trails Program grant and a matching donation from First Bank in Albemarle. It is being called Phase I of the Wood Run Area Trail Expansion. Although most of the work being done consists of relocations and rehabbing of the existing Supertree Trail, Keyauwee Trail, and a portion of Wood Run Road, there has been enough new singletrack trail created to call this a true “expansion”, and that’s exciting!

The ribbon-cutting “event” consisted of a catered BBQ lunch, a brief announcement and thank you’s to the people and groups that came together to make this happen, and some loosely organized rides to go see the new trail. Yes, a ribbon was cut. 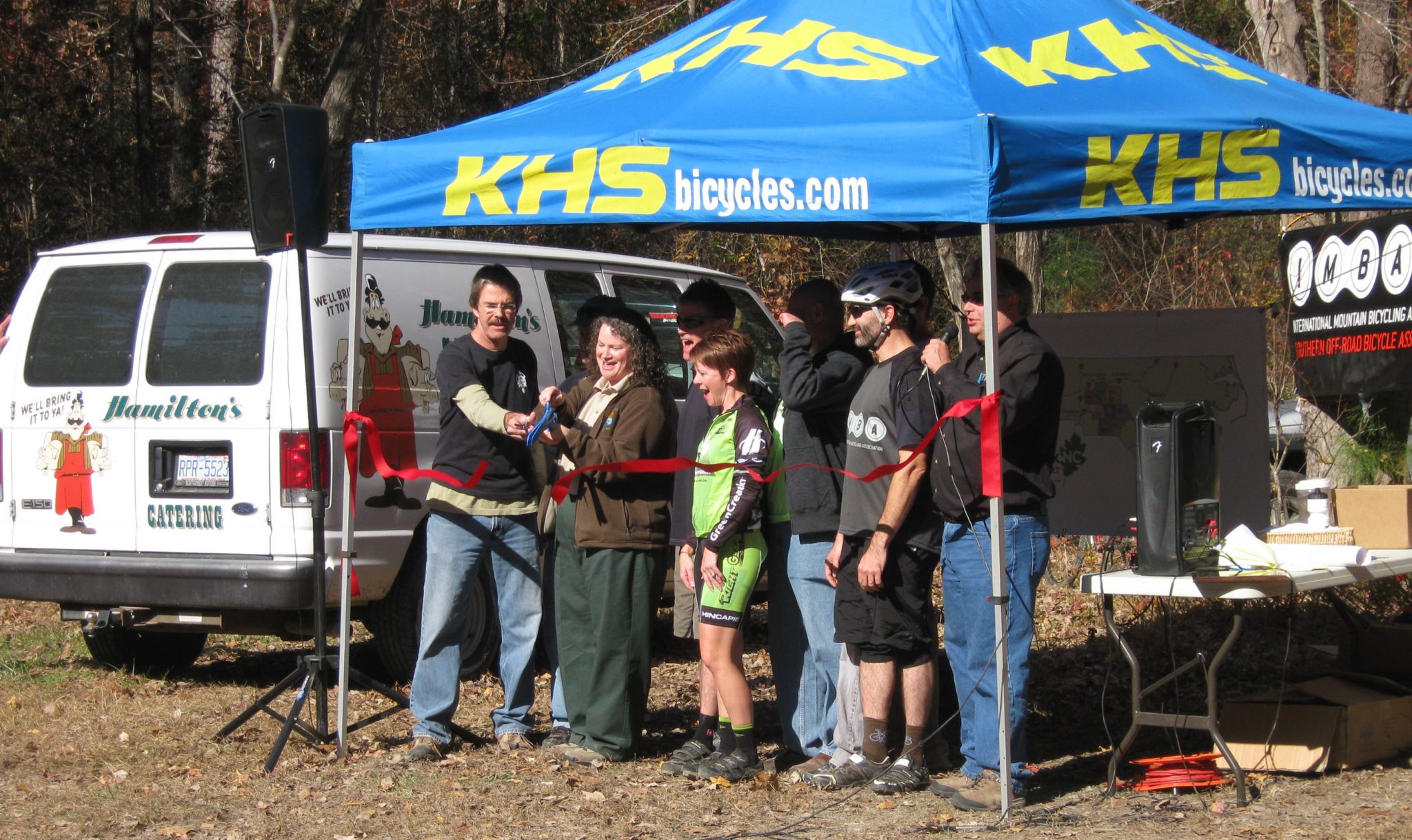 Brian Bristol was the hero of the day and was given due praise for his extensive efforts to bring together the people and groups that made this expansion happen. Brian acknowledged my work as one of the early torchbearers who started UMBA and worked with the USFS to get the first “bike trails” signed and opened in the Wood Run area. Thanks Brian!

UMBA started in the mid 1990′s. Brian got involved in the mid-2000′s and transitioned the “club” to a SORBA chapter and helped carry the dream forward. The “club” then evolved into IMBA/SORBA and the Tarheel Trailblazers out of Charlotte got involved. A grant of nearly $95,000 was awarded last year and Trail Dynamics was contracted to do the trail work. I’m sure most of the riders reading this will find the history lesson interesting, but are really wanting to know what was done on the ground!

After the festivities settled down, Brian and I rode out from the Wood Run Camp on Keyauwee Trail, heading clockwise around the trail. The trail was rehabbed from the camp up to where the hiking trail intersects. The intersection was moved slightly to the left to line up better with a completely rerouted section climbing up the first mountain. The new trail swings further to the west and switchbacks up the mountain to tie into the old trail near the top.

From there, the trail down to the end of Walker Mountain Road was rehabbed with rolling grade dips. At the road, new trail angles off to the left and heads south around the contours of the mountain before turning back and heading north again. This new trail crosses the gravel road once and switchbacks up the mountain before contouring along the west side of the mountain. As it drops off the mountain from there, I was reminded of the smooth-rolling grade dips found on the Warrior Creek trails near Wilkesboro, NC. Those trails were just awarded IMBA Epic status this past week, so making this comparison is significant!

The trail crosses the big creek in a well-armored new location and works its way around to tie into the old trail along the relatively flat section between the two creeks. The steep climb up to the road from the big creek is history now. There were some minor reroutes from the small creek up to where the Uwharrie Trail crossing was, but that section is still a significant singletrack climb in this direction.

After crossing the Uwharrie Trail, Keyauwee still works it’s way around the shoulder of Dennis Mountain on the old off-camber section, but after that it has been routed to gain elevation smoothly up to the saddle. From there, it follows an old road bed back to Wood Run Road. The one short singletrack climb in the middle of this section has been rerouted to switchback up in a more manageable way.

Even though Brian I and I missed riding during the middle of the day, I think we caught the light just right with our late day spin through the trails. The low angle of the sun lit up the changing leaves in fluorescent yellows and reds. Beautiful. 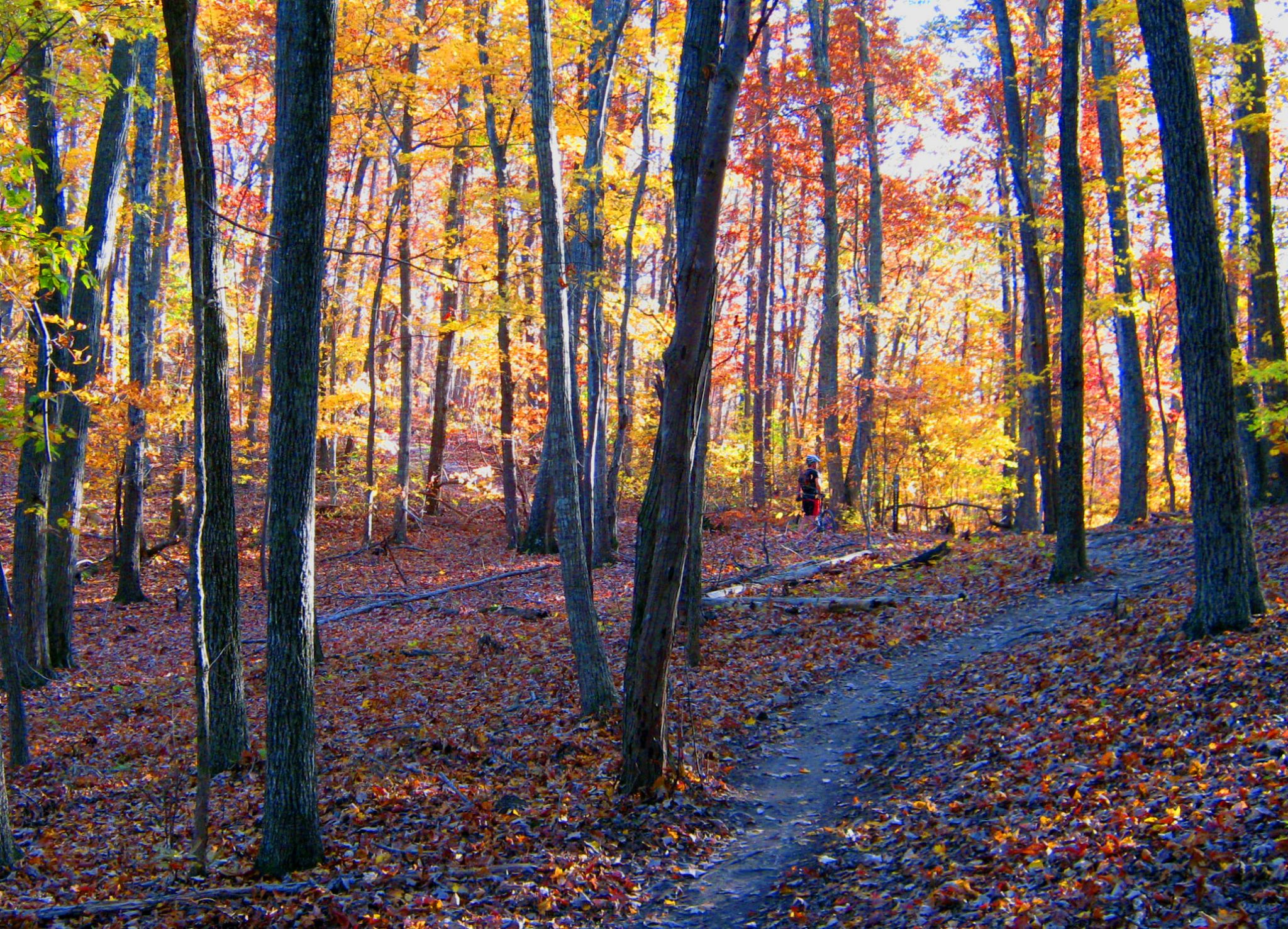 We also rode through Supertree clockwise. Only the first part of the reroute on the south side of the power lines has been completed, but they will eventually move all of the trail from the power lines back to Wood Run Camp off of the road and onto new singletrack.

The first piece of trail built was an alternate to riding Wood Run Road all the way to the Camp from the NC24-27 parking lot. Just past the power lines, the new Wood Run Trail splits off to the right and snakes its way to the camp. This section also features the flowy feel of a well-designed and properly built trail.

Ed Sutton and the Trail Dynamics crew did a great job building the new sections of trail and rehabbing the existing trail to make it all nearly maintenance-free. Taking care of water drainage is the key, and they have done that well with rolling grade dips, banked switchbacks, and proper sloping. They even worked in a few rock garden sections, with bypasses, for those riders who aren’t content with just flowing smoothly through miles of secluded forest trail.

If you can’t get out to ride Wood Run right now, you can see still see the trail, sort of. I found these youtube videos of the new Keyauwee trail, taken several weeks ago. The trails are a lot more polished now, but you’ll get the idea. This guy rode it the opposite direction from the way Brian and I did. Video 1 – Video 2 – Video 3