Just a few miles southwest of Asheboro, NC, in rural Randolph County, lies the Birkhead Mountains Wilderness. This is a relatively small unit in the USFS-managed system, and one of just a handful of designated Wildernesses in North Carolina. Unlike many other Wilderness areas, the Birkhead Mountains Wilderness contains numerous historic remnants that are signs of past human residents. In fact, the name “Birkhead Mountains” came from the Birkhead family that once owned over 3,000 acres that included the most prominent mountain-like ridges in this area. There are a few standing rock chimneys still remaining from the old tenant farms, and several more collapsed chimneys. Old roadbeds still traverse the ridges and follow the valleys. The remains of old rock dams can still be found across many of the creek bottoms. But the forest is steadily reclaiming this area that was once home to a number of families and farms.

Hike Trip #215 is a loop that starts at the Thornburg Farm Trailhead and loops clockwise around the central triangle formed by the main trails of the Birkhead Mountains Wilderness. I started out my latest hike of this route early on a late January morning. It was sunny, but a bit frosty, and there was a definite nip in the air. There were two frosted cars in the parking when I arrived. I’m guessing they belonged to backpackers already camped out on the trail somewhere.

The USFS is restoring the Thornburg Farm as a period exhibit of an 1820’s working farm. The Thornburg Trail passes through the yard of the old farmhouse and between several of the outbuildings. The original farm road passes to the right side of the house, but a walking path goes through the yard on the left side. There are informational signs on posts beside each of the buildings, describing the purpose and age of each. 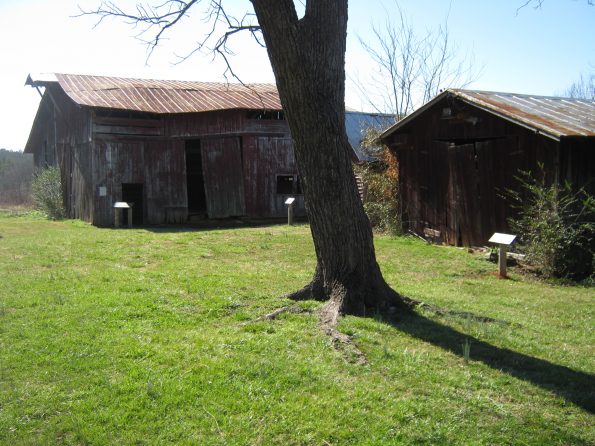 I hiked along the farm road past a frosty, fallow field sparkling in the morning sun and then over Betty McGees Creek. Farm tractors just ford through the creek, but hikers have a small footbridge to keep our feet dry. I was momentarily confused by two trail options on the far end of the bridge, but soon realized that the trail proper swings out into an old field along the creek, while the other trail was made by hikers who seemed determined to get back to the farm road as soon as possible. Those hikers have tromped out a muddy path back down the creek bank and onto the farm road. The trail through the field rejoins the farm road about 100 feet further along, once the road is up out of the flood zone.

The farm road climbed quickly and soon brought me to a nice overlook of the creek from a little rock outcrop. Higher up I passed a recently sown field that appeared to have inch-high wheat or grass coming up. It is probably one of the fields being managed as a wildlife food plot. This field caught my attention because it seemed to be so much more open to the sky than the lower fields. I noted to myself that it would probably be a nice place to star gaze from, being so far from street lights. From there, the trail follows the farm road up towards the ridges that form Birkhead Mountain.

The trail soon came close to a larger rock outcropping. Relatively isolated groups of rocks poking up out of the ground like this are fairly common throughout the Uwharrie Mountains. Most of them appear to be disc-shaped, looking like a set of fat stone pancakes buried halfway in the ground, on edge. A foot trail branched off to the right here and headed toward this set of rocks. I saw a recently used rock fire-ring there, and could see how that would be a neat place to camp. The foot trail then reconnects back to the old farm road and the main trail.

Someone had erected a fairly new wooden sign with routed lettering at the intersection with the side trail. I found it a little confusing because it had arrows pointing left and right, with the name “Robbins Branch Trail”. That’s the name of the trail that the Thornburg Trail eventually tees into, a mile or so further on. I first thought maybe there had been a major reroute since the last time I had visited.

Below that sign was another that said “To Birkhead Mtn Trail”, with arrows pointing to the left. From here, you have to follow the Thornburg Trail almost a mile to it’s end, take a left on Robbins Branch Trail, and hike over a mile and half to the end of that before you finally tee into the Birkhead Mtn Trail. The signs’ information could be considered technically correct, but they seemed out of place to me. Of course, I would recommend that you trust your guidebook first, and well-intentioned signs second. These were not official USFS signs. 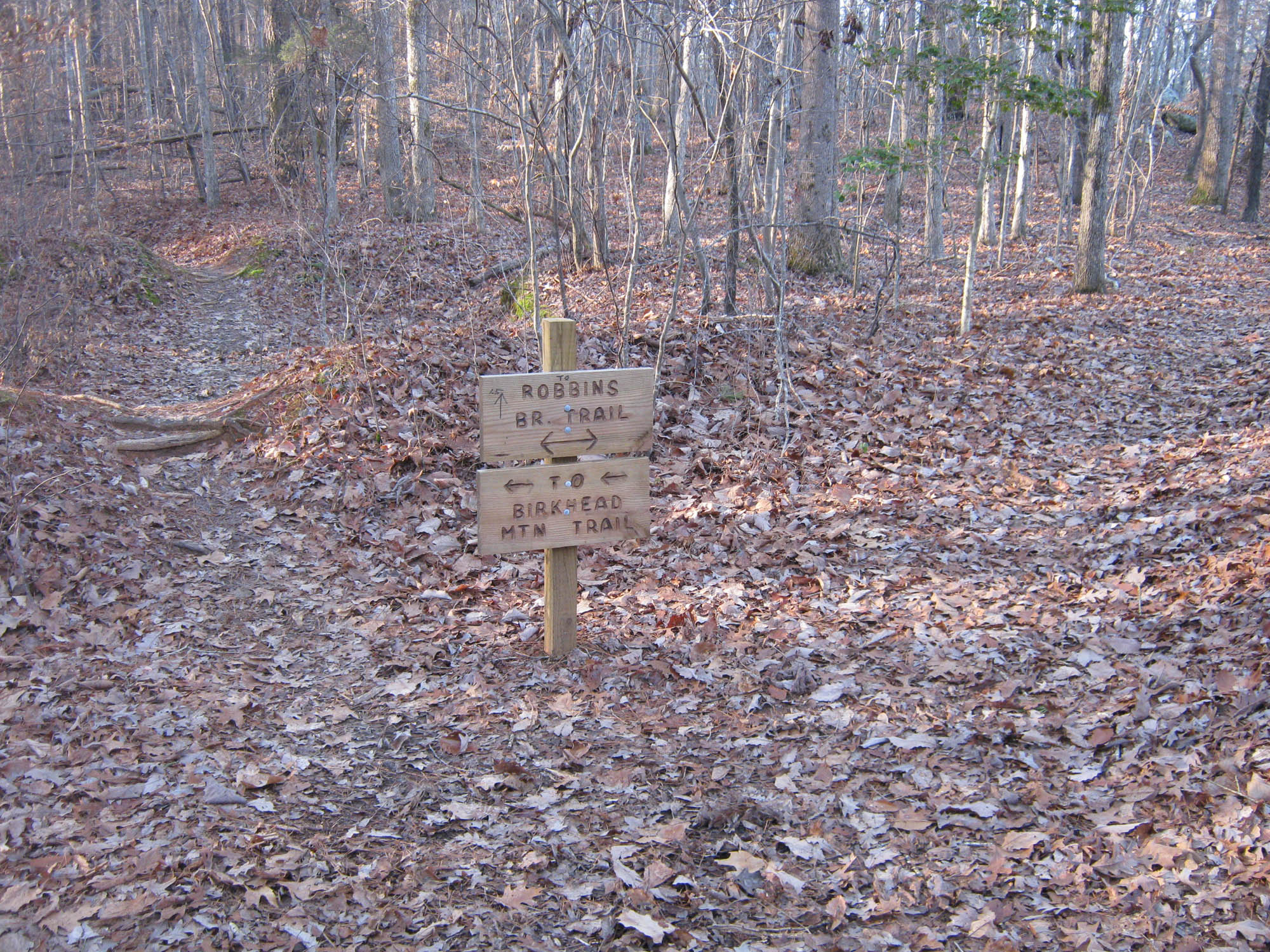 After thinking about this sign a little more, I’d be willing to bet that the sign installer, having already toted the heavy sign post and posthole diggers up the trail to this location, saw this “intersection” and was more than happy to set his load down and erect the sign. The sign would make much more sense if it was placed at the Thornburg/Robbins Branch Trail intersection, which is the next and only “real” trail intersection you come on the Thornburg Trail.

Trail signage and the trail itself were both easier to follow after that. The Thornburg Trail is blazed with white paint. There is an official USFS-made sign where the Thornburg Trail tees into Robbins Branch Trail. Less confusion resulted when I read that sign. Following the Hike #215 route, I turned left/north here and followed the trail as it dropped off the ridge down to Robbins Branch and then cross-crossed the branch numerous times, leading me upstream. The trail eventually climbs up onto the main ridge of Birkhead Mountain itself, where it tees into the Birkhead Mountain Trail.

The trip route turns right and follows this section of the Birkhead Mountain Trail along another old road on the top of this long ridgeline. It eventually drops down the southern end of the mountain and intersects with the Hannahs Creek Trail. Turning right on Hannahs Creek Trail, I soon passed by a beautiful example of an old stone fireplace and chimney. It is actually a double fireplace, with two separate hearths on opposite sides of the chimney. Not far from here, I met a small group of hikers, some of which were members of the original Uwharrie Trail Club. I had met several of them many years ago. They were still out enjoying the trails and were glad to hear I was working on a revision of the guidebook.

As I hiked along Hannah’s Creek Trail, I noticed a couple of unsigned trails that I did not remember from previous visits. They had obviously been used a fair amount since last fall’s leaves fell, so they must go somewhere interesting. I didn’t have time today to explore them, so I’ll save them for another day’s adventure.

Hannahs Creek Trail parallels it’s namesake, although not too closely, crossing a few small side streams along the way. It does stray far enough from Hannahs Creek to take you by another impressive set of boulders. 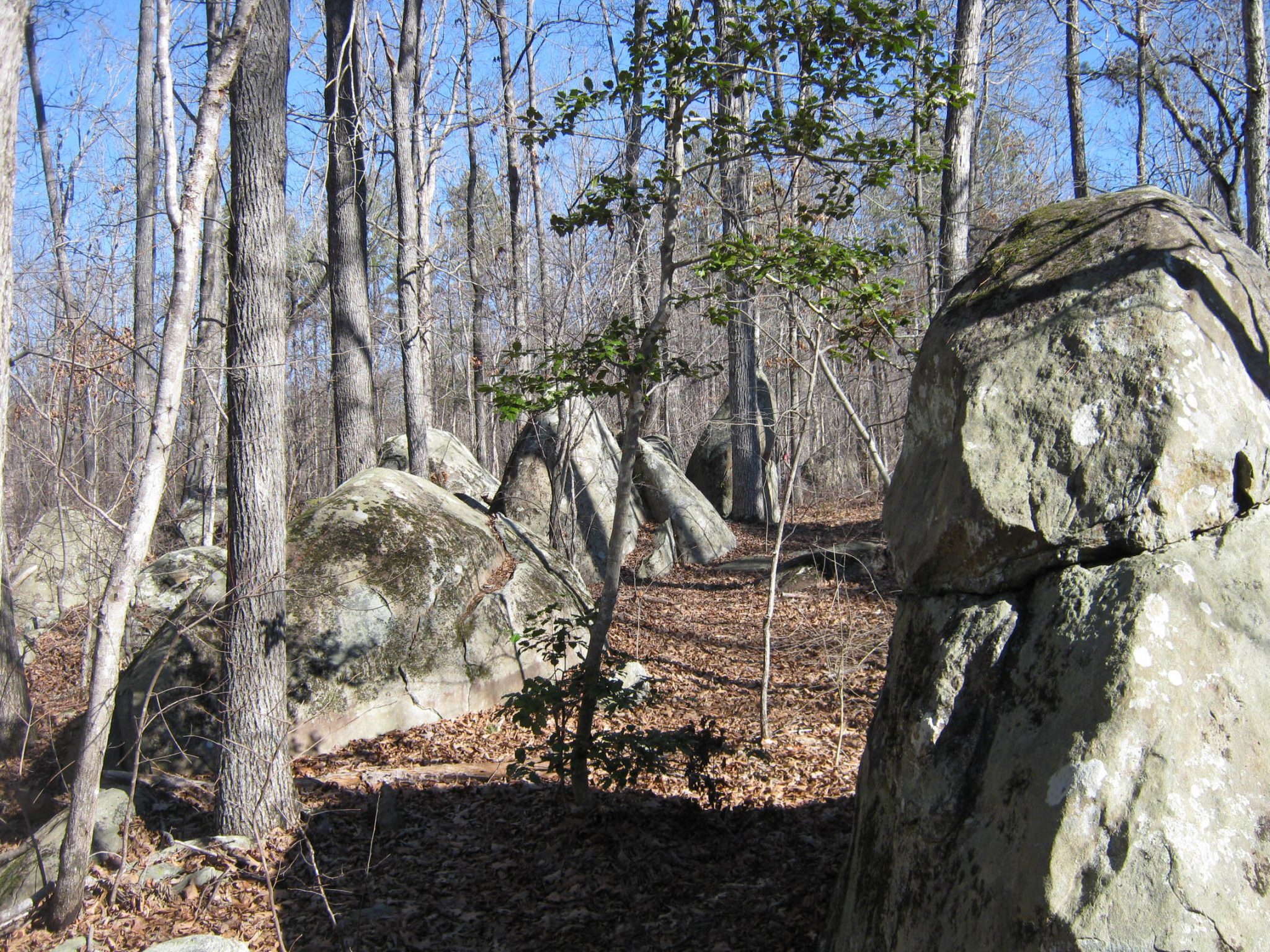 The #215 loop hike is just over 10 miles long. A detailed map, mileage chart, and elevation profile can be found on pages 214 and 215 of the Uwharrie Lakes Region Trail Guide.