Most hikers I know love interesting natural locations and interesting stories. Combine the two and you definitely have their attention. Liquor Spring on Dark Mountain in the Uwharrie National Forest is such a place.

I first read about Liquor Spring years ago in Joe Moffitt’s book An Afternoon Hike Into the Past from 1975. In the book, Joe told the story of a bootlegger from Albemarle, NC who killed two Revenuers and then hid out on Dark Mountain. This man went by the name of Willie Smith, at least after coming to Dark Mountain. He dug a cave to live in with his wife and set up a whiskey still near Liquor Spring. His cave became known as Outlaw Cave. Another story told about the three Hulen brothers who also hid out on Dark Mountain and were killed near Liquor Spring in January 1865 for being deserters.

A visit to Liquor Spring promised to be a fun hike. It was likely to be a beautiful, remote location in the forest. The stories would provide something to ponder while one was out there, in the forest, mostly alone.

Unfortunately, Joe’s book only described the location of Liquor Spring as being on Dark Mountain. He included a general map in the book, but his hand-drawn trail lines and place markers didn’t provide much more accuracy than his written description. Joe passed away a while back, so asking him for more specific location details was no longer possible. If I was ever to find Liquor Spring, I would need some help.

Mike Chisholm worked with Joe to build the Uwharrie Trail in the 1960’s and 70’s. He spent quite a bit of time exploring the forest himself. As I was chatting with him about the Uwharrie Trail last year, he mentioned that Liquor Spring was in the next valley east from where the Uwharrie Trail climbs the ridge to Dark Mountain from Jumping Off Rock Trailhead. Mike’s tip pointed me to a specific side of the mountain and a specific valley to search in.

Hancock and Finley both included Liquor Spring Camp in their books. Both authors provided specific distances, in yards and feet, to the camp and the spring.

Hancock’s directions for the camp and spring started from a nondescript point along the Uwharrie Trail 0.1 mile south of the trailhead parking lot.

“Liquor Spring Camp (EL 550) is located 50 feet to the left (SSE) of Trail at the edge of an old logging road. The spring is located approx. 100 yards down the logging road (SSE) and down a ravine to the right of the road. Look for path.”

Finley’s directions started from the junction of the Uwharrie Trail and an old logging road.

After reading Hancock's and Finley's directions, I was starting to feel pretty confident I could follow these clues to find Liquor Spring!

Of course, things rarely work out as smoothly as we hope.

The two set of directions were written from different starting points. But both authors seemed to agree the camp was located along the old logging road that starts at Flint Hill Road east of the trailhead and merges with the Uwharrie Trail. Anyone who has participated in the Uwharrie Trail Run has traveled this old logging road – they always start the run up this road instead of up the tight, steep footpath behind the trailhead kiosk.

However, Hancock’s details about the elevation of the camp, the compass directions along the old logging road, and the distance from the trail to the old logging road didn’t quite match up with the information I could see on a map. Having to do a bit of interpretation of the clues was adding to the fun. Were any of these details typographic errors?

Mike Chisholm’s tip about the spring being in the next ravine east of the Uwharrie Trail did match up with Finley’s directions. As the saying goes, ‘two out of three ain’t bad’. I could probably get to the correct ravine before I switched from following other people’s clues to searching with my own eyes and feet.

Starting from Jumping Off Rock Trailhead, I hiked south up the Uwharrie Trail for 0.26 miles to the junction with the old logging road. The old logging road merges with the trail from the left at a sharp angle. If you’re not paying attention, it is easy to miss. You have look back over your left shoulder to notice the old road. The pile of limbs and sticks I saw placed across the road to divert trail hikers coming from the south may not always be there to help out.

From the junction, I turned left and paced out Finley’s distances along the old road. I was pretty close to his measurement when I reached the ‘woods road on your right’. Finley used a measuring wheel and I was just counting paces, so I expected a little difference.

Finley’s distance to the camp location placed me in a spot where signs of a logging operation landing were visible. Faint mounds of debris circled the area, a result of it having once been cleared off. Some of Joe’s other camps were located at logging landings. This seemed to validate Finley’s location of the camp.

I then paced out Finley’s measurement to the beginning of the side trail to the spring. No signs of an old blaze or footpath were noticeable near that spot. I eventually decided to just walk eastward from the old road down into the valley. I didn’t have to go far before I could see a clear stream of water running at the bottom of the slope. This is a decent spot to get water if you’re camping nearby, but I was looking for the springhead itself.

The floor of this small valley was flat and wide. I could see another stream of water joining the near one, but the thick growth of laurel kept me from seeing the opposite side of the valley. I decided to follow this first stream uphill.

The stream led to a broad seep coming out of the hillside. No clear springhead was visible. It probably wasn’t the spring I was looking for. I weaved through the laurel and further across the valley floor until I reached the next stream of water.

Following it upstream led me to a wide soggy area with an odd-looking pile of rocks in the middle. The rocks had obviously been stacked by hand. The pile was about the size of a crumbled chimney, but it would have been an odd place for a house - right in the middle of a soggy valley.

Perhaps this rock structure had something to do with a whiskey still? I remembered another part of Finley’s description about Liquor Spring.

“And yes, an outlaw by the name of Smith did used to make liquor at a still just a few feet downstream from the spring. It was one of three that he operated for a “Southern gentleman” who didn't care to have anyone know where his money came from.”

If this rock structure was part of that still operation, then Liquor Spring should be close by!

I walked upstream a few yards and the water disappeared. The little gully continued uphill for as far as I could see but was dry and didn’t appear to lead to a springhead. Instead of backtracking down to where the next stream channel joined in, I decided to just climb over the small ridge into the next gully and try to pick up the next stream there.

The ridge was not very wide. I soon found myself pushing into another laurel thicket. Once inside the thicket, I could see water at the bottom. A few feet further in and I was able to make out a small pool of water at the foot of the hillside.

After stepping around so I could look upstream across the pool, I could see there was a low wall of stacked rocks at the upper edge of the pool. A large flat rock lay on top of the wall of smaller rocks, just like someone would place to protect a springhead. This might be Liquor Spring! 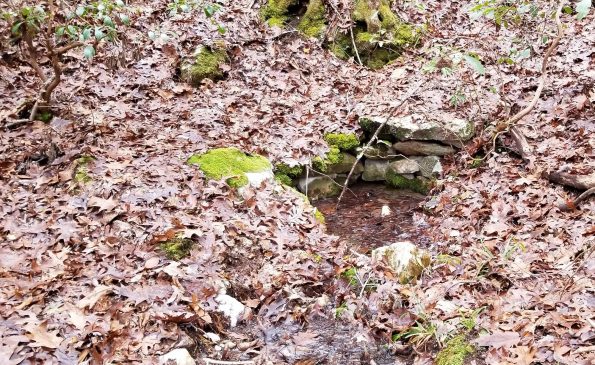 Maybe. Just to be sure, I also explored the next gully over.

I found another small pool of water with a couple of rocks visible at the upper edge. These rocks could very well have been placed to protect a springhead too, but more effort had been put into protecting the previous springhead. There were no other gullies beyond this one.

Following the clues left by Moffitt, Hancock, and Finley in their books, and a tip from Mike Chisholm, I had located several springs in a small valley on the north side of Dark Mountain. At least one of the springheads was well protected with stacked rocks. I had also found an unusual set of stacked rocks that just might be the site of the whiskey still operated by the outlaw Willie Smith. It seemed likely these springheads were Liquor Spring.

I recorded GPS coordinates for the locations of the springheads and rock pile. This option wasn’t available to the guys who left clues in their books before. They did the best they could at the time.

My next steps are to share the story of my search for Liquor Spring in this blog post and then include it in a book about similar 'lost' places in the Uwharries. Hopefully, my story and documentation will help others be able to find and appreciate these places and help keep the history alive. It's the best I can do at this time. 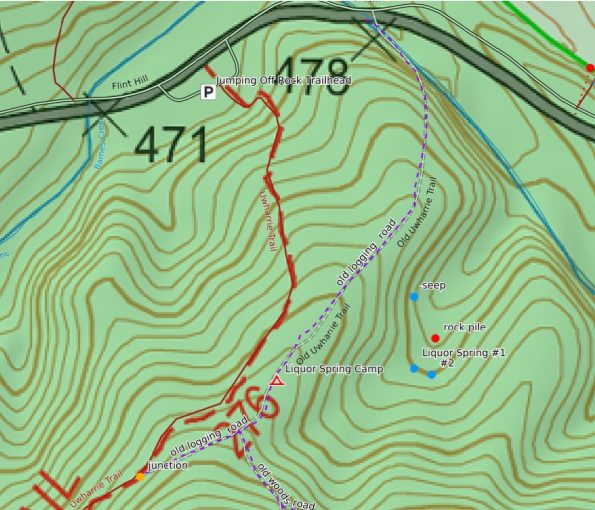 Can you find Liquor Spring?

If you decide to use the information I've shared here and try to find Liquor Spring yourself, please come back and leave a comment below. I'd love to hear how your visit went!