All Hallows’ Day dawned crisp and clear. Despite our anticipation and readiness for spooky hi jinks the night before, we were unable to conjure up any newsworthy phenomena. We loaded our gear on the motorcycles and rode a couple blocks down the street to the Ocracoke Coffee Company, a small shop we’d noticed the night before. A few cups of java and some giant muffins filled our bellies and opened our eyes.

Before we left Ocracoke, we cruised over to the lighthouse. If you’re going to ride the OBX, you gotta visit the lighthouses! Construction on the Ocracoke Lighthouse started in 1798 and took 25 years to complete. It is the oldest operating lighthouse in North Carolina, and the second oldest in the country.

Ocracoke Island is only about 15 miles long, so it didn’t take long to ride to the north end. There are lots of things to see along the way. Lots of ocean to the right. Lots of sound to the left. Lots of sand dunes and sea oats and some maritime forest in between. We would appreciate it more later on when we were dealing with lots of lanes and traffic.

The ferry at the north end took us over to Hatteras Island. We were ferry-riding, island-hopping pro’s now, so riding on and off the ferry was no big deal. The Hatteras Lighthouse was our next stop. This 210-foot-tall brick lighthouse’s claim to fame is that it was moved 2,900 feet to it’s present location. In 1999, the shifting sand island had eroded (no surprise), leaving the lighthouse’s base within 15 feet of the Atlantic Ocean. In a remarkable feat of engineering, the 5,000 ton structure was jacked up and moved to a new spot 1,500 feet from the water. It is tallest brick structure ever moved, successfully. 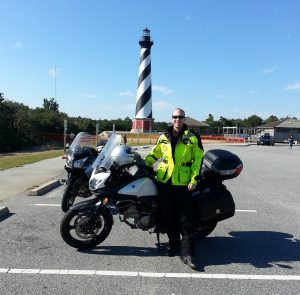 From Hatteras, we continued riding northward. The unstable nature of these barrier islands makes it a real challenge to maintain something stable on them, like a paved road. Quite a bit of NC 12 has been “protected” by a 20-foot-tall man-made sand dune pushed up between the road and the ocean. Not exactly the most scenic stretch of road I’ve ridden. It did not help that the clouds started building and the wind picked up. The temperatures also started dropping.

Riding over the Bonner Bridge was interesting as it took us way up in the air over a lot of water. The open feeling of freedom while riding a motorcycle lets you better experience the vertigo of spots like this. Fortunately the wind was directly in our faces on the bridge, and not trying to push us around.

By the time we reached the Bodie Island Lighthouse, the cloud cover was pretty solid. Our breakfast muffins were also just a ghostly memory by now, so we turned west on US 64 and headed to Roanoke Island, last known location of the famed Lost Colony. The winds that were bringing in the cloud cover were coming from the north. That gave us a stiff side wind as we crossed the long exposed bridge to this island in the middle of the sound.

When you’re riding on two-wheels, side winds are something you have to get used to. You must lean the bike into the force of the wind to stay upright and steady. Works great, if the wind is steady and even. I’ve noticed that the bike and my body seem to react to side winds automatically, before the brain says “hey, you need to do something here”. I’m not sure if that’s an instinctual reaction, or I just have slow brain cognition. The good news is that it happens when I need it to, but my head always feels like it’s arriving at the party late. That results in a bit of panic adrenalin. With every gust. The wind-bike encounter may also result in some re-positioning within the lane. Stronger, sudden gusts sometimes execute a lane-change for you. That can be a little alarming. I was glad to ride off the far end of the bridge.

In my trip planning, I had run across the Full Moon Cafe, another perfect fit into our Halloween-themed adventure. It was a small pub, but served good food and fresh brew. This place was so tiny that sacks of grain for their brewery were stacked along the wall, the tanks were lined up in front of the bay windows, and there wasn’t even a proper sink behind the bar. The bartender simply dumped rinsewater into the floor drain. Good times!

After lunch we headed back across the bridge. The cross winds were coming from our left this time. Since we were riding in the right lane, the gusts were diffused a little by the time they hit us. Or maybe the extra weight in our bellies stabilized us more. We made it to NC 12 again and continued north along NC 158. We were going to stop at the Wright Brothers Memorial, but it was starting to spit rain. The entrance fee wasn’t worth the few minutes we would have spent there, so we rode on. Maybe next time.

Kill Devil Hills is home to Outer Banks Brewing. They were the first wind-powered brewing operation in the US. Brian is a professor in the renewable energies program at Appalachian, so we had to stop and check it out. The winds were continuing to pick up, so their windmill turbine was doing its thing!

We didn’t stay too long in Kill Devil Hills. Our route would take us to the mainland via the long bridge just north of Kitty Hawk. This bridge also runs east-west, giving the north winds another crack at us. By now the moisture falling from the sky had increased from spitting to something between a heavy mist and a light rain. The gusts of wind were stronger. Getting across this bridge required a bit of death-grip, hanging-on-for-dear-life, and some seat-puckering. I love it, especially when it’s over!

A dozen miles up a long peninsula took us by the Weeping Radish Farm and Brewery.  They claim to be the oldest microbrewery in NC, opening in 1986, after working to get NC law changed to allow breweries to sell their product on site.

The rest of the afternoon was just an exercise in cranking out misty miles. We rode by Elizabeth City, through lots of flat countryside, and eventually reached Merchant’s Millpond State Park. I hear the millpond is pretty neat, but we arrived just before dark and were mostly interested in pitching our tents and finding a hot shower!

The mist let up enough for us to cook and eat a camping dinner at our picnic table. I was prepared to set up my kitchen on the bathhouse floor, but it didn’t come to that. We toasted another memorable day of riding and relaxed for a little while. It didn’t take long for us to have enough of that. Today’s miles and the intense focus and the death-grip riding had taken their toll. Sleep was well-deserved that night!

Sunday morning arrived partly cloudy. My house was a few hours of riding away. Brian’s was three hours beyond that. We decided this was not a day for relaxed touring. The last two days had been good. It was time to get home and back to reality. I had the GPS lead us to larger, faster highways, and we started busting out the miles.

The sun eventually melted away the clouds and made for a more pleasant experience slabbing it home on the interstate. It had taken us more than five years to get back out together on motorcycles. I’d be lying if I said it was worth the wait. The scariest part of this whole Halloween adventure was the realization that we could have been doing trips like this all along!

This is the last of a four-part series.

part 3 – Trouble in the Dark

part 1 – Getting on the Road Again