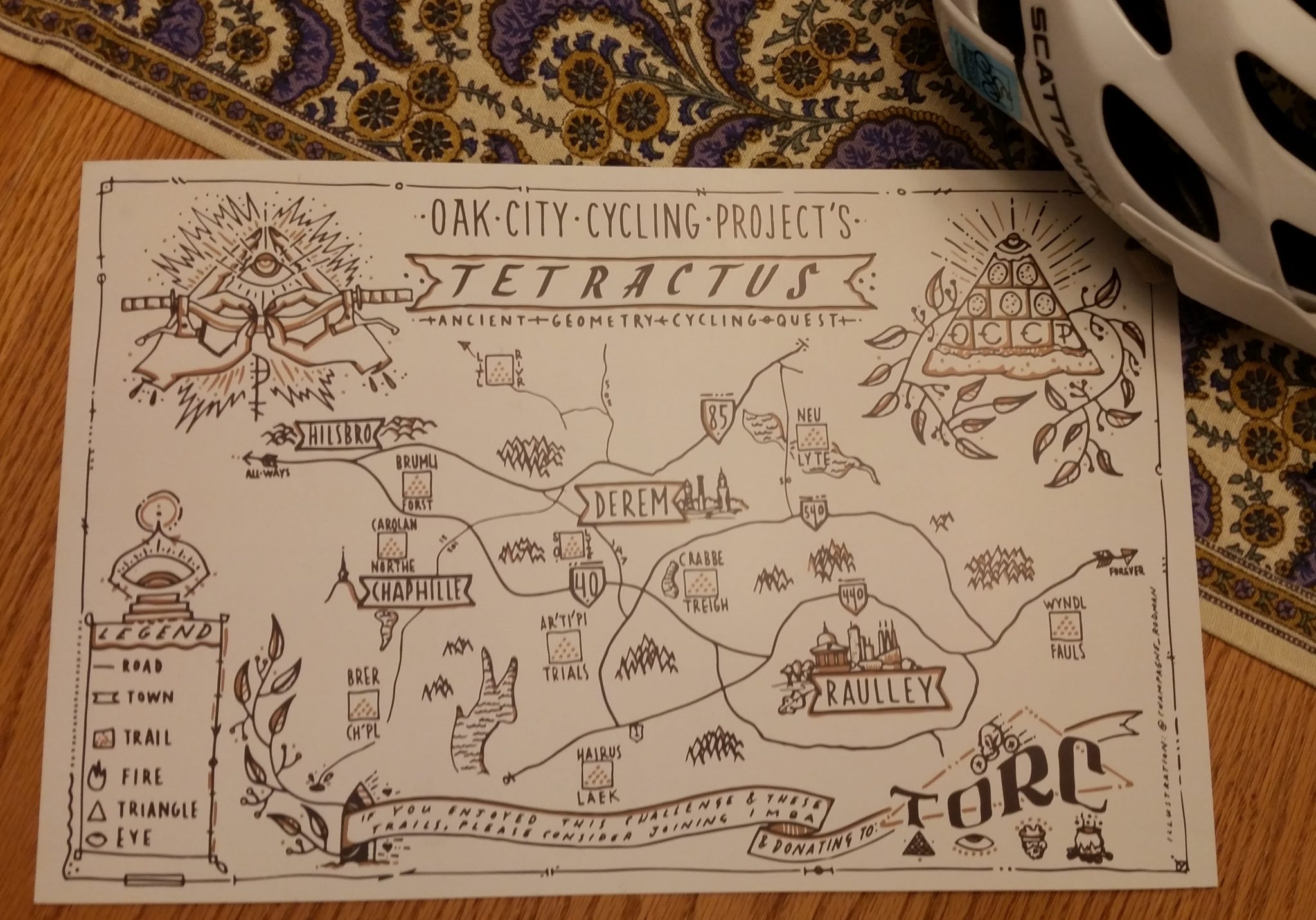 Need a little motivation to help you ride more often and on more trails? If you’re like me, you probably end up riding the same trails over and over. Riding just for the sake of biking is all fine and well, but sometimes a little motivation can make riding a lot more fun. Enter the Tetractus!

The Tetractus is the third bicycle challenge from the folks at Raleigh’s Oak City Cycling Project bike shop. I enjoyed their Neuse Deuce and Lucky Bike 100 challenges, so I was excited to see them roll out another one.

Completing the Tetractus challenge requires you to ride ten singletrack trail systems maintained by Triangle Off-Road Cyclists (TORC). The folks at OCCP will give you a stylized map/poster showing these Triangle trail systems. They’ll stamp each trail system on your map after you show them GPS tracking proof of your ride. Get all ten stamps and they give you a nice embroidered patch to recognize your accomplishment. Participation is free. 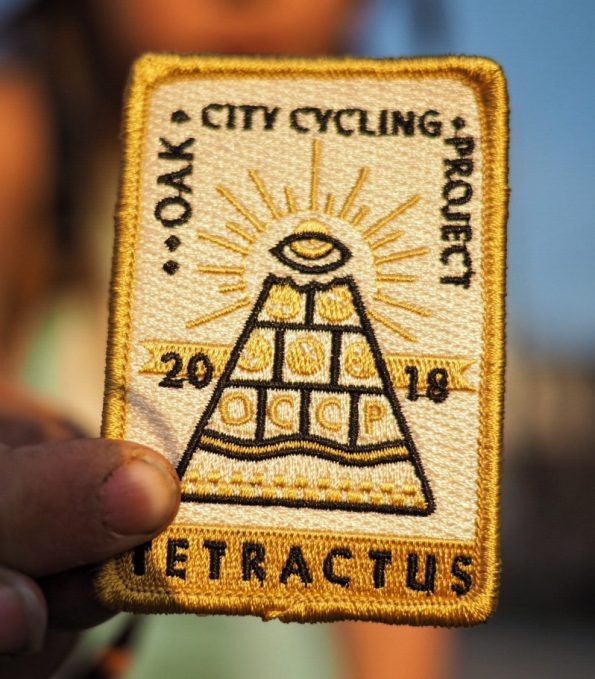 Where did the name ‘tetractus’ come from? According to Wikipedia, a tetractys is a triangular figure consisting of ten points, popular with the ancient Greeks and the worshippers of Pythagoreanism in particular. I get the tie-in’s to the ‘Triangle’ area of NC and the ten trail systems. I can only imagine what conversation the guys at the shop were having that brought these things together with ancient Greek geometry and led to their ‘Eureka!’ moment.

My Tetractus journey began after I talked three riding buddies into joining me for a Sunday trip to ride the Little River Regional Park trails north of Durham. To make the drive worthwhile, we also planned to visit the Brumley Nature Preserve trails.

Without the motivation of the Tetractus Challenge, we would not have traveled so far just to ride these trails. We might not have even ridden that weekend. Score one for OCCP’s ultimate goal of getting more people out on bikes more often to show TORC trails some love!

I also made a trip to the OCCP shop to pick up my Tetractus map and bought a couple chainrings while I was there. Score one for OCCP’s bottom line.

We enjoyed riding Little River, which is part of the Orange County parks and recreation system. The trails are well-laid out and the tread was in good shape – partly because these trails aren’t over-used and partly because the guys taking care of the trails are doing a great job. Plenty of twisties were included which kept our average speed down and our attention to trees and curves up. More mileage like that would have been awesome. Our total was a little over six miles without repeating any of the loops. 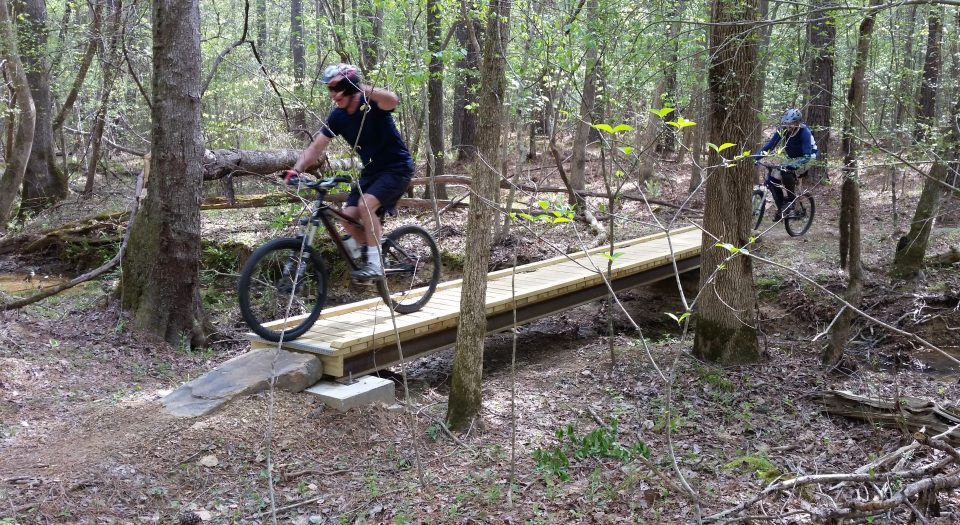 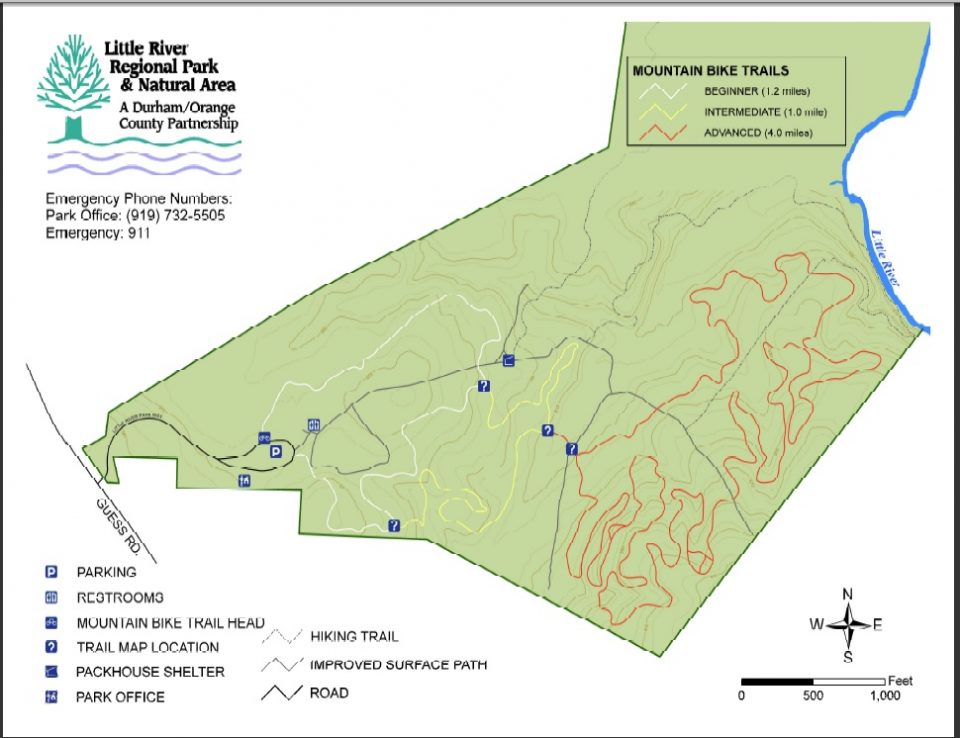 The Brumley trails are 20 minutes from Little River (if you don’t take any wrong turns). This 613-acre property is managed by the Triangle Land Conservancy. I heard these multi-use trails were professionally designed and built, so we had high expectations. We were not disappointed. The trails are smooth and flowy. There are plenty of bumps and dips to keep it interesting. The biggest rock outcrop is easier when the trails are ridden counterclockwise, but there’s a bypass if you’re riding the other direction. Hike-only trails also run through the area, but there are lots of signs to keep you on the right track. Our total was just over nine miles for a once-through pass.

The general consensus among my group was that we needed to come back and ride them in the opposite direction before we could offer a fair assessment of the Brumley trails. Score another one for OCCP’s ultimate bike-more goal!

We considered hitting the trail again right then, but we were getting thirsty and hungry by this point. Someone pointed out that Mystery Brewing in Hillsborough was just a few miles away. Someone else remembered that Hillsborough BBQ Company was right next to them. The handful of snacks we’d brought along were quickly replaced by a new plan!

With a little motivation from the Tetractus, an almost-didn’t-happen-ride turned into a really fun trip with bikes, bbq, and a few buds!

Look for more updates soon as I work my way through the map!

Oak City Cycling Project, for the Tetractus map, stamps, and the patch